Dahlias not blooming is something to worry about because this is a plant that’s most famous for its sweet-looking flowers. 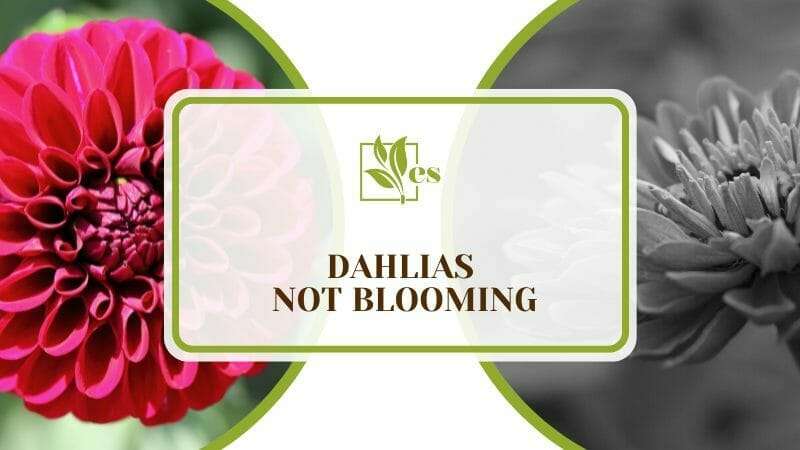 If you want to find out why this might be happening to your plant, then look no further than the comprehensive expert guide we provide in this article.

Why Are My Dahlias Not Blooming?

Dahlias might not be blooming because of lack of enough sunlight, incorrect watering, or planting at the wrong time. Sometimes, too much nitrogen or a powdery mildew infection might also be responsible.

Dahlias not blooming is a big problem faced by many Dahlia parents who wait the entire year to see their plant producing gorgeous flowers. Mostly it’s either lack of proper care or external diseases that prevents Dahlias from growing tall and flowering.

Read about all these factors in detail here.

Also if the duration of the time that these plants receive direct sunshine is not enough, then their flowering will also be affected.

Another common reason behind Dahlia buds not opening is the lack of adequate water. If the soil of your Dahlia plant is dry most of the time, then it is being underwatered.

During the growth season, this plant grows quite rapidly and sprouts new leaves and buds every few days. Not providing it with enough water will lead to impeding its bloom.

– Not Planting at the Right Time

Whenever Dahlias are planted in early spring like most other plants, their tubers cannot tolerate the post-cold soil. This is because these plants are native to warm tropical lands and need temperatures above 50 degrees Fahrenheit to grow and reproduce.

Planting in the early season will result in Dahlias not growing tall, less flower production, and even rotting in cases where the soil is particularly wet. 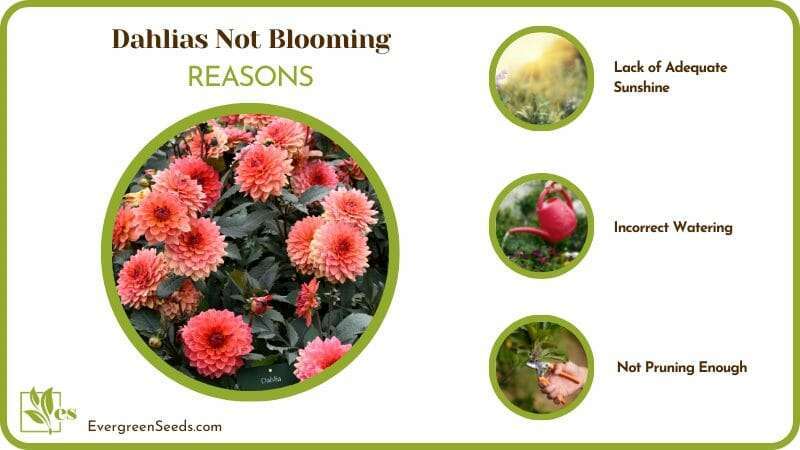 Deadheading is the process of cutting off the flowers of a plant. Plants produce flowers to make seeds for the next generation. When you cut flowers off, the plant tends to produce more flowers as a compensatory mechanism.

It has often been observed that not deadheading Dahlias tends to slow down their flowering instead.

– Giving Too Much Nitrogen

Too much nitrogen in the soil causes Dahlias to produce lots of healthy leaves, but it might also be responsible for your Dahlias not flowering. More than the usual amount of nitrogen actually suppresses flowering, especially when it is given before the Dahlia bloom season.

The Dahlia plant does need nutrient-rich soil to grow to its full height and produce an exuberant bloom, but if you are fertilizing an already rich soil or using a fertilizer with a high nitrogen content then that spells trouble for your bloom.

You can easily check whether nitrogen is responsible or not by testing your soil. A soil testing kit can be ordered these days and then sent to a laboratory to find out how much nitrogen is present in your soil.

Powdery mildew is a common fungal infection that almost always leads to Dahlias not sprouting. Although it is not a fatal infection, it might weaken your plant significantly enough to suppress its bloom.

– How to Spot Powdery Mildew

Here are some signs and symptoms that you can observe on your Dahlia plant if it has been infected by this disease:

How To Get Dahlias to Bloom

In order to get Dahlias to bloom with proliferation, provide lots of sunshine and water, plant them later in the season and treat powdery mildew on time.

– Give Them Plenty of Sunshine

Your Dahlia tubers need at least 6 hours of direct sunshine each day starting from the spring season if they are to flower on time. If you live someplace where the sun isn’t strong enough, then this time will extend to about 8 hours.

Of course, it’s best to grow these plants outdoors, but if you are keeping them indoors, then you should always place them near a window.

Additionally, we recommend providing your plants with six to eight hours of direct early morning sunlight. This will give these plants enough mild sunlight without subjecting it to the harsh late-day sunlight.

The Dahlia tubers need plenty of water, especially during the flowering period from spring until summer. Water these plants at least two times each week to make them flower. Give water deeply, which means give ample water each time and keep watering until it starts to come out of the drainage hole.

The soil of this plant needs to be kept moist at all times during the warmer months. In order to create a balance between this and overwatering, mulching is a great option. Spread a couple of inches of mulching material on top of the soil to improve the latter’s moisture retention. 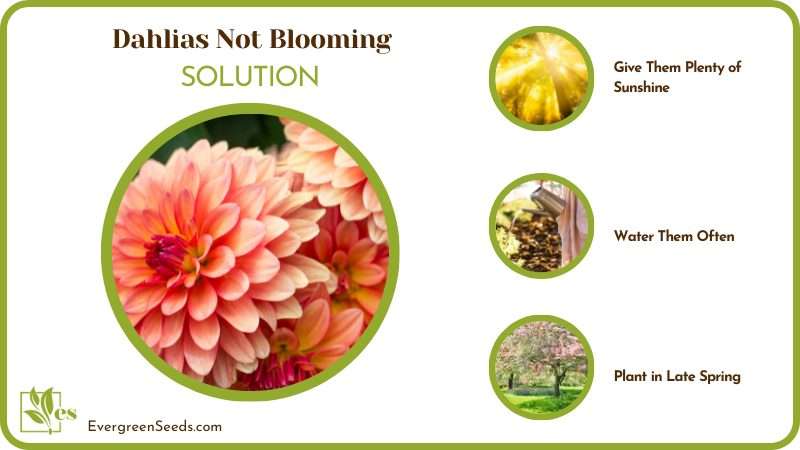 – Don’t Use a Nitrogen Fertilizer on Dahlias Before Bloom

The N-P-K ratio written on the package of all fertilizers stands for Nitrogen-Phosphorus-Potassium. Choose one that has a low N-P-K ratio such as 5-10-5.

Secondly, do not fertilize right before the bloom period begins. Dahlias tend to bloom from late summer until fall each year.

Always plant your Dahlias tubers in late spring when the soil temperature goes above 50 degrees Fahrenheit. Only then will new shoots begin to sprout and grow. As the weather warms further throughout the summer, flowering will start in late summer and last until early fall.

Powdery mildew is not a particularly damaging infection and will rarely kill a plant, but it needs to be treated early and properly because it will not let your plant produce flowers. It might also be responsible for Dahlias not growing tall.

Given below are some time-tested methods to get rid of powdery mildew:

Make a habit of deadheading some of the flowers as soon as Dahlias start flowering. This sounds counterintuitive but it actually forces your plant to produce more flowers and is a common practice to improve the yield of Dahlia flowers. 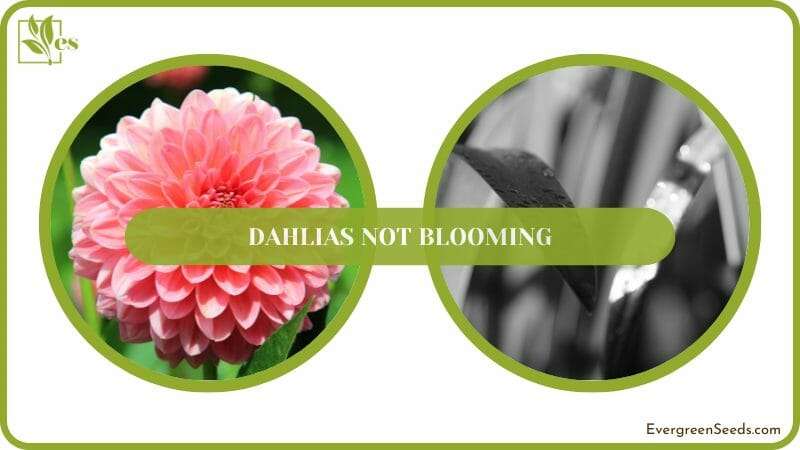 You now know the various reasons why your Dahlias are not blooming and how to fix them. Let’s quickly summarise this whole guide below.

There is no doubt that Dahlias produce one of the most delicate flowers out there. If your Dahlias have stopped flowering, you don’t have to worry as you have this handy guide to help you out! 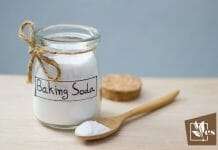 Will Baking Soda Kill Grass: The Safest Way To Use It on the Lawn 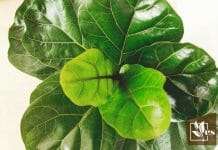 Overwatered Fiddle Leaf Fig: Tips To Save the Beautiful Tree 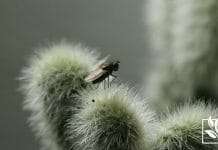 How To Tell if a Cactus Is Dead: 5 Important Signs To Look Out For