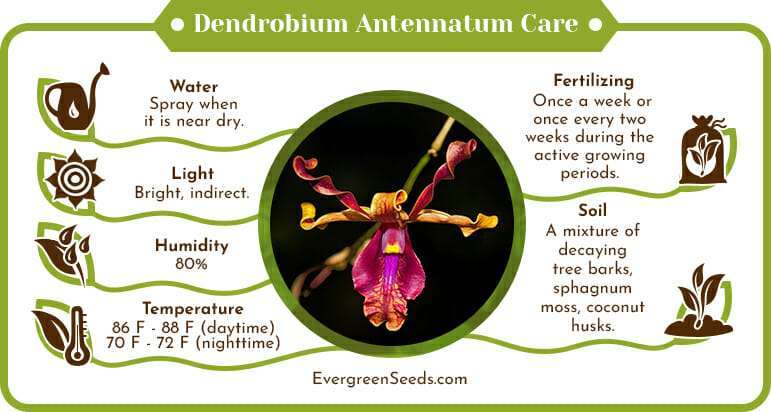 The Dendrobium antennatum, known for its interesting flowers, is classified as an endangered plant under the Australian Government Environmental Protection and Biodiversity Conservation Act of 1999.

The unusually shaped flowers are not often found in most dendrobium species, and for this reason, many orchid collectors have placed this plant on their most-desired list.

The Dendrobium antennatum is a compact and bushy orchid plant that grows quite quickly, with evergreen foliage made up of long and lanceolate leaves. Despite its intricate appearance, the plant is extremely easy to care for and is a great pick for novice orchid growers, with some growing it as a hanging plant in their living rooms. 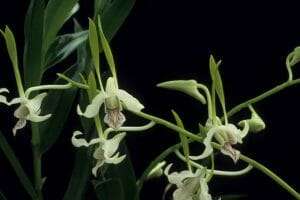 First described formally by John Lindley in 1843, the plant derives its name from the unique flowers with delicate twisting petals that echo the mesmerizing spirals of the antelope horn. It is also commonly called the Green Antelope Dendrobium due to the two distinctive spiral green tips of the extended and upright Dendrobium antennatum petals.

It is also called by other names, such as the Antelope Orchid, Antenna Orchid, and The Antennaed Dendrobium. Some plant enthusiasts even call it Callista antennata, Ceratobium antennatum, Ceratobium albertisii, and Dendrobium d’albertissi.

The Dendrobium antennatum is a medium-sized orchid plant with a preference for hot to warm tropical climates and rain forests. Some varieties can grow to larger sizes when placed in ideal conditions and under ideal care and cultivation despite their intermediate size.

Since the Antelope Orchid is acclimatized to hot, warm environments, its pseudobulbs have evolved into basally swollen nodes that are endemic for many orchids growing in tropical lowlands. The leaves are glossy, narrow, and leathery, almost succulent and lance-like. Young leaves start out light green and eventually turn darker as the leaves mature.

The Dendrobium antennatum roots are both epiphytic and lithophytic. Since the Antelope Orchid is basically an air plant that can also adapt to living in and on rocks, its roots have naturally adapted overtime to stay moist but not wet. Care for these plants in temperate climates should simulate similar environmental conditions in the dry and wet seasons.

In temperate climates, its roots tend to dry out slightly due to the colder days if heat lamps are not used. However, Dendrobium antennatum roots grow back quickly in spring under the right conditions, even without heat lamps. 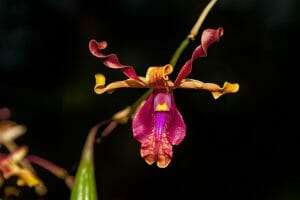 The Dendrobium antennatum petals are quite spectacular, given that they are not a common sight for many growers in temperate locations. However, by ensuring the ideal light and heat through artificial means, plant collectors in colder climates can coax the Antelope Orchid into robust growth and blooms.

The flowering season is usually in late spring to summer, and flowering is frequent and excessive, often lasting for six weeks up to three months.

The flower’s petals are often pale, with two upright spiraling petals in pale green hues. The lip of the flower has purple veins with a sharp tip. The flower spikes often have at least three flowers and at most around fifteen. The flowers are often fragrant and may last for months. The Dendrobium antennatum can even start blooming like a young plant as long as it is placed under perfect conditions.

Antelope Orchids are often found in New Guinea, as well as the other islands around it. The Dendrobium antennatum grows mainly on the branches of trees in rainforests, swamps, and savannahs. While they are mostly epiphytic air plants that thrive in lowland marshes, the plants have also been known to flourish in higher altitudes with high humidity conditions in the Solomon Islands and Australia.

The Antelope Orchid can be found happily growing near waterfalls, nestled among the decaying materials of the various rocks jutting out from the falls.

As a plant accustomed to tropical conditions, the Dendrobium antennatum surprisingly grows well even in temperate climates. It tolerates the colder seasons, though precautions should still be taken to prevent frostbite from killing the plant. When taken indoors during the winter months, medium to bright indirect lighting is ideal, along with providing the Antelope Orchid with warmth and good airflow.

The Dendrobium antennatum loves bright, indirect light almost year-round and may even be grown successfully in living rooms, where sufficient lighting, warmth, temperature, watering, and fertilizing requirements are met. Plantlets and seedlings benefit greatly from bright indirect light as it prompts them to grow strong pseudobulbs and foliage. When using grow lights, the Antelope Orchid needs an average brightness level of 20,000 to 30,000 lux.

Antelope Orchids have traditionally grown in tropical environments, and as a result, their watering needs can be quite specific. Even though it is an easy plant to care for, it is worth repeating that the Dendrobium antennatum prefers to have its roots moist but not wet.

Water the plant’s growing medium only when it is near dry, but do not soak the plant in water as it could lead to root rot. Misting is recommended during the drier and warmer months to increase the humidity of the plant’s surroundings. In cooler months, water sparingly but not to the point of dryness.

The Dendrobium antennatum is a thermophilic plant, which means it thrives in warm temperatures. It is most comfortable when the temperature it is grown in reaches 86 to 88F during the day and 70 to 72F at night.

Mounted on old tree trunks, cork, and rootstocks, the Antelope Orchid grows even better when the presence of decaying plants and matter is within the range of its aerial roots. Epiphytic plants, or air-growing plants like the Dendrobium antennatum, prefer to use trees and other plants for support.

Similar to other dendrobiums, the Antelope Orchid can also be found growing between rocks or even above them. The plant’s roots are so adjusted to living in small spaces that they are most suited for clay pots that seem too small for their roots.

The ideal potting medium is a mixture of decaying tree barks, sphagnum moss, coconut husks, and other plant parts that decay as time passes by. Orchid poles are also a more modern approach to mounting and giving them a supportive home to thrive in. Porous, permeable materials are the best substrates for the Antelope Orchid to ensure the right amount of moisture without compromising excessive water content, leading to root rot.

Repotting is best once new roots appear, every year, or when the roots start to outgrow the container.

The Antelope Orchid loves a humidity level of 80 percent all year round as it is primarily a tropical epiphytic plant that absorbs moisture through its aerial roots. Rudimentary humidifying systems will keep the Dendrobium antennatum happy and growing in temperate climates, as will frequent mists and sprays under warm, controlled temperatures. For tropical locations, minimum humidity maintenance is required.

Fertilizers soluble in water are highly recommended for Dendrobium antennatum plants, especially during growing seasons and younger plants. In temperate climates, regular fertilization of the Antelope Orchid is recommended during the spring and summer months, with a reduced and diluted amount to be used during the colder winter months. Fertilizers should be applied once a week or once every two weeks during the active growing periods, and a weak solution should be used once a month during the cold season.

There is no real dormant season for the Dendrobium antennatum. However, during the cold wintry months, growth and blooming periods may cease in temperate locations where days are shorter than the nights. In this stage, the entire plant may experience slower growth, and care should be taken during this stage that watering is to be done sparingly yet at the same time not allowing the Antelope Orchids to dry out completely.

The Dendrobium antennatum is a surprisingly low-maintenance orchid that is easy to grow despite its exotic appearance and origins. Under the perfect ideal conditions, many growers have made the Antelope Orchid thrive and flower, either naturally or under controlled conditions.

Let’s go over everything once again so you can start to prepare to grow your beautiful orchids.

The Antelope Orchid is a beautiful, exotic plant that repays its caretakers with a spectacular array of blooms with uniquely shaped petals that taper off into slender spiral chartreuse tendrils. Even in temperate climates, the Dendrobium antennatum is extremely easy to grow and will delight plant lovers with its dazzling beauty for years to come. 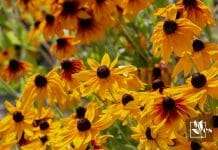 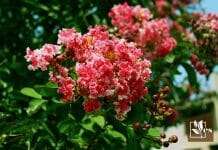