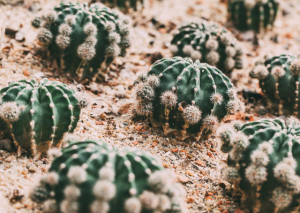 Echinopsis oxygona is a charming flowering spherical cactus from the Cactaceae family, native to South America. This indigenous hermit grows in arid and rocky areas throughout southern Brazil, Uruguay, and Argentina.

Its botanical name is derived from the Greek word “ehinus” or hedgehog and “opsis” due to its long spines and shapes. In addition to this complicated scientific name, it is also called the Easter lily cactus.

Echinopsis Oxygona is a species of cactus that grows in a charming spherical or conical shape. The cactus body (actually thickened stem) is divided into pronounced lobes and can grow 10 inches high and 4 inches wide.

At their edges, 1-inch long, sharp spines with black tips appear. It can grow as a single plant, but over time it is adorned with many lateral offsets which form irresistible prickly compositions.

The magnificent funnel-shaped, fragrant white or pink flowers appear on 8 inches long, erect petals. Unfortunately, each flower individually lasts only one day, but a flower show can last several weeks.

Generally, Echinopsis oxygona is a very hardy cactus that can withstand almost anything except excess moisture and temperatures below freezing.

However, if you want the plant to thrive, grow, and bloom and not just survive, you need to provide it with adequate conditions.

The soil in which you grow your Echinopsis oxygona primarily has to be light and well-draining. Originally from arid areas, cacti and succulents have adapted to inhospitable conditions in which water scarcity prevails. Therefore, soil that stays moist for a long time is not suitable for its cultivation.

When planting your cactus, try to find the ready-made soil specially created for the needs of succulents and cacti. Alternatively, you can also make your mixture by combining a standard substrate with sand in equal proportions to enhance the permeability of the substrate.

Echinopsis oxygona is a desert plant accustomed to large amounts of direct sunlight. It will enjoy any place with lots of lighting, including even the south window. If there is not enough light, the plant will not die, but it will lengthen towards the light source, it will not produce offspring, and flowering may be completely absent.

If you have the opportunity, in the summer, take it outside to a nice sunny place. Yet, do not immediately expose it to strong direct sunlight and keep it in a partially shaded spot for the first two or three days to acclimatize.

Echinopsis oxygona, like other cacti and succulents, stores water supplies in its thickened stems. Keep this in mind when watering the plant! On the other hand, despite its own water reserve, this cactus still needs watering, but not to the extent that you water other leafy plants.

In the growing season, water sparingly but regularly, once every 10 or more days, more often if the plant is on a sunny window sill.

In winter, you can forget about watering. During this period, the plant rests and prepares for spring, so what it already contains in stems is quite enough to keep it alive. Just in case if the substrate is completely dry, you can water it once or twice during the fall or winter.

High temperatures during the day but low at night are the conditions prevailing in the homeland of this plant. The ability to withstand large temperatures makes it one of the very adaptable houseplants. The optimum temperature at which it thrives ranges between 55 and 100 F.

This cactus can withstand short-term low temperatures up to 10 F. This does not mean that you can grow it as a garden plant in areas with harsh and long winters. In such areas, however, place the plant in a protected area in the fall.

The advantage is that it can overwinter in unheated or poorly heated rooms such as bright basements, hallways, or garages. Moreover, a plant that spends its winter in a colder space blooms more abundantly than one that winters in the warmth of your living room!

When it comes to Echinopsis oxygona, you do not have to pay special attention to humidity. Of course, it prefers dry air but is not particularly picky and will tolerate a slightly higher humidity level.

In other words, unless it is an extreme case, the humidity of the space does not significantly affect its growth and development. A standard humidity level in the range of 30 to 50 percent is something to which it adapts easily and quickly.

This modest Echinopsis oxygona that in nature grows on poor soils does not require particularly intensive fertilization. However, it is beneficial to feed it two or three times during the growing season with liquid fertilizer dissolved in water.

You could use a standard fertilizer with a balanced NPK ratio or a special fertilizer for cacti. Since phosphorus stimulates flowering, you can also use fertilizers with a slightly increased level of this element before the plant begins to bloom.

When planting Echinopsis oxygona, choose shallow and wide pots since it has a poorly developed root that spreads more horizontally than vertically. Deep containers retain more moisture, the substrate dries harder, and sitting in moist soil is always threatening for this plant.

It is best to plant Echinopsis oxygona in a pot made of natural materials such as clay since it is porous and absorbs moisture from the substrate.

No matter what type of container you choose, the drainage layer at its bottom is indispensable. Large gravel or broken tiles layer over the hole will allow rapid drainage, keeping the plant from overwatering.

Another advantage of Echinopsis oxygona is that it does not need to be transplanted often. Generally, repotting Echinopsis oxygona every second or third year when it completely outgrows the pot is enough. In rock crevices, where it usually grows in nature, there is never an abundance of space, so compaction will not bother it at all.

In other words, Echinopsis oxygona can stay in the same container for years! Moreover, many cactus and succulent enthusiasts would agree that it looks better when decorated with a few generations of offspring.

Echinopsis oxygona belongs to a group of cacti that reproduce very easily. The most reliable method is using offsets, but the plant can also be propagated by seed.

During the first month, do not water at all. The moisture from the substrate is enough for the plant to form a root. When you notice fresh green color and new thorns on the top of the offset, the plant has started to grow.

Propagating Echinopsis oxygona by offsets is easy if you own or have access to an adult specimen. If that is not the case, you can grow the new plants from Echinopsis oxygona seeds, which you can easily order at one of the online stores. However, keep in mind that this is a time-consuming process, so be patient.

The best time to grow from seed in early spring.

Germination is sporadic and can take from a few weeks to several months. When seedlings appear, water them carefully with small amounts of water. Once the seedlings have grown enough that you can handle them, transplant them into small individual pots.

Echinopsis oxygona is generally sturdy and is immune to pests or diseases. Moreover, caring for Easter lily cactus comes down to not caring about it too much! It is a resistant plant that will resent you if you neglect it occasionally.

Still, here are some problems you may face when growing this plant:

If you water Echinopsis oxygona too often, it will most likely result in root rot.

The process begins underground, and soon it is transmitted to the stems, which become soft and mushy. Unfortunately, the disorder is so destructive, causing the stem tissue to decay.

However, if the process did not affect the whole plant, you can try the following:

– Dry, Shriveled Edges of the Lobes

Echinopsis oxygona, like all other cacti, can withstand long periods of drought, but that does not mean that you can leave it without water for weeks. When it drains all the water from the substrate, the plant will start consuming the sprouts stored in the stems.

Lack of water will first be visible at the edges of the lobes that begin to change color, dry out, and wither. If it does not get the necessary moisture, the plant will perish. It is a long-lasting agony that you can prevent as soon as you notice the first signs!

It may sound paradoxical that a cactus can get sunburns because it is synonymous with a plant that grows due to the relentless heat of the desert. Still, it can happen. If the Echinopsis oxygona plant grows on a southern window sill behind the glass, it can get burns on its stems. It is better to move it either from the outside or a little away from the glass.

Sunburn can also occur if you place the plant from the room in the garden in a sunny position without preparation.

Fortunately, Echinopsis oxygona is pretty uninteresting to most common pests, but this does not preclude it from being attacked by pests. Occasionally, mealybugs or red spiders can appear. However, this rarely happens, and if it does, you do not need to worry. A simple treatment with natural insecticides like neem oil will solve the problem!

When dealing with cacti, be careful and take precautions as their sharp spines make it difficult to handle even when they are very young or small offsets. Ordinary garden gloves are not enough because the thorns can pierce them easily.

Use thick protective gloves similar to construction workers’ gloves, made of hard materials such as natural uncut leather. Do not touch the cactus with your bare hands! Additionally, when you propagate or transplant it, it is advisable to wrap it in several layers of paper or thicker cloth! 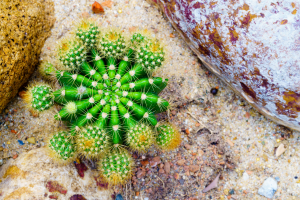 Like other succulents, Echinopsis oxygona is a modest and undemanding plant. Its cultivation will not require much time and effort.

However, take note of the following:

Even when you are not a fan of cacti, the fantastic flowers of Echinopsis oxygona, raised high above the spherical prickly body, will surely delight you. Just follow the recommendations we shared with you, and you’ll be able to grow the charming Echinopsis oxygona successfully. Just always wear protective gloves when handling this plant! 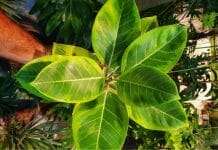 Vicks Plant: Your Guide to Growing It Yourself! 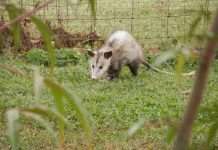 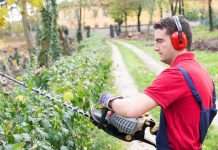