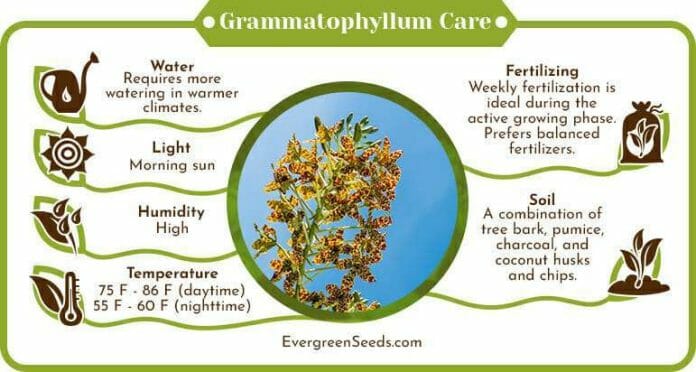 The Grammatophyllum is commonly known as the Queen of Orchids because of its enormous size. These amazingly large plants thrive in high levels of humidity during their active growing season.

The Grammatophyllum is an orchid known for its long-blooming fragrant flowers and amazingly marked leaves. It is also referred to as the Sugar Cane Orchid due to the perceived similarity of its foliage to sugar cane leaves. The large flowers of this plant are quite fragrant, which attracts many pollinators.

Caring for the Grammatophyllum is quite simple. While its size requires thoughtful planning, the orchid only needs the proper conditions to settle in comfortably. The appropriate set of conditions such as light, water, temperature, and humidity will encourage the Queen of Orchids to flourish and flower.

The Grammatophyllum requires abundant watering during the growing period, which typically falls in the warmer parts of the year. It is important to consider that while the orchid loves frequent watering, it does not tolerate prolonged exposure to standing water.

In warmer climates, the Queen of Orchids requires more watering than those in milder temperate regions. In colder regions, as well as during colder periods of the year, watering should be reduced to keep the roots moist but not wet. The orchid also prefers strong air movement to keep its roots aerated even in damp conditions.

The Grammatophyllum prefers moderate levels of light intensity to thrive. The appropriate light levels for this massive orchid are around 32,000 to 65,000 lux. Too little sun, and the leaves turn dark green. While the foliage may be attractive, this condition will not coax it to flower. Too much sun and the leaves turn bright lime-yellow and may possibly suffer from leaf burns.

Morning light is best for the Queen of Orchids. The orchid plants should be ideally located in the East or South to avoid harsh noon and afternoon sun exposure.

The Grammatophyllum thrives when its roots are damp, and the right planting medium is ideal for maintaining this level of moisture in the root system. The most common mixture is a combination of tree bark, pumice, charcoal, and coconut husks and chips. This semi-permeable mix of materials will allow a certain amount of water to be retained and drain the excess quickly.

Ideal containers are terracotta clay pots, which can easily wick away excess water. Growers may want to repot Grammatophyllum orchids every two to three years when the roots grow out of the container. Newly repotted plants should be acclimatized by placing them in slightly lower levels of light for several weeks. 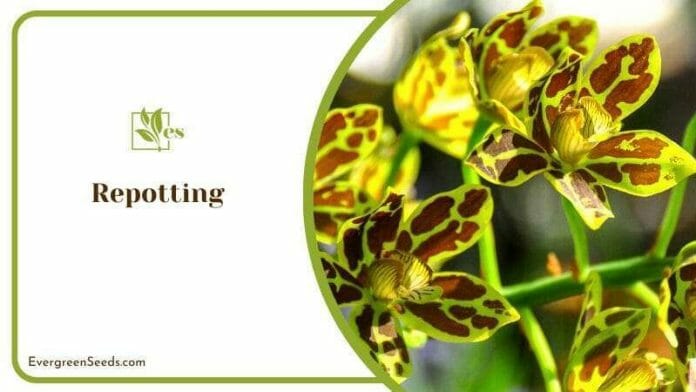 The Grammatophyllum tolerates a surprisingly considerable amount of summer heat provided that they are exposed to cooler temperatures at night. While it tolerates cool temperatures, the orchid can get frostbite if exposed to overly cold conditions.

The Grammatophyllum enjoys high levels of humidity during its growing season. Since its native habitats are humid and warm, the orchid has adapted to such muggy conditions quite well. The orchid prefers a humidity level of 55 to 80 percent to keep it from getting dehydrated.

Misting on the leaves of the plant also increases the humidity, and this technique can be exceptionally useful for growers living in drier regions. This technique should include a good air circulation system to prevent mold and fungus growth on overly wet leaf surfaces.

The Grammatophyllum plant is a heavy feeder with a preference for balanced fertilizers. Ideally, the fertilizer formula should reflect the type of potting substrate that the plant is in. Weekly fertilization is ideal during the active growing phase of the plant, which is usually from spring to early fall.

The fertilizer should be diluted to half the recommended dosage, and clean watering in between feeding schedules to eliminate salt build-up. The roots of the Queen of Orchids are sensitive to excess salt build-up. From mid-fall to winter, fertilization should be stopped.

The Grammatophyllum may require a rest from its active growing and flowering phase. At this stage, the plant should still be watered regularly to keep its roots damp. Fertilization at this point should be halted.

In colder climates and regions, some cultivators transfer the Queen of Orchids indoors to keep them safe from frostbite. Some gardeners opt to place these plants in greenhouses where they are less prone to be exposed to overly cold conditions.

The Grammatophyllum is uncommon in cultivation due to its size. Most gardeners may find it challenging to allocate the space and methods in cultivating this large orchid, as it does not tolerate frequent disturbance.

The Queen of Orchids is usually propagated through division, as this is the fastest and easiest way to ensure a high yield and viability compared to other propagation techniques.

The Grammatophyllum is sometimes shortened to “Gram” by those in horticultural circles. The full name is derived from two Greek words: Gramma, which means a line, a streak, or a mark, and Phyllon, which means leaf. This refers to the dramatic leaf and flower markings of the orchid, which can sometimes seem like a showy resemblance to written words.

Another name is the Tiger Orchid, due to its unusual markings, which are attributed to resemble the tiger’s unique striping.

The Grammatophyllum orchid is a large orchid, although some grow only to medium sizes as well. The orchid plant is primarily a large orchid with pseudobulbs that can grow up to a length of eight feet.

The clustering growth habit of the Queen of Orchids can be quite immense, with some mature clumps weighing several hundred pounds to even up to a ton.

The Grammatophyllum orchid has large pseudobulbs which are covered by sheaths. The pseudobulbs can be around eight inches in length and produce three to four robust leaves that reach up to three feet. The linear leaves are normally arranged in two rows and droop from the base when the leaves mature.

The roots of the Grammatophyllum orchid form remarkably large bundles. The roots start out with bright green tips, which are eventually covered by a protective white sheath. 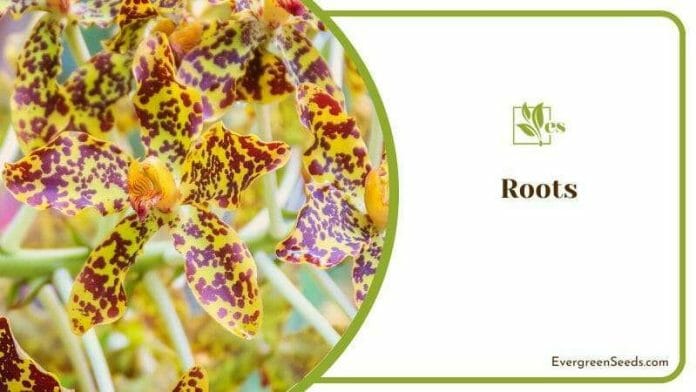 The fat, noodle-like roots eventually mature into a woven bundle resembling a large nest. The interconnected roots form a magnificent upward basket from which the orchid appears to grow from.

The epiphytic nature of the roots indicates that the Queen of Orchids takes most of its water and nourishment from the surrounding air. The roots are sensitive to prolonged exposure to standing water, and this situation may cause the roots to rot.

The mature Grammatophyllum orchid produces several racemes which come from the base of the large pseudobulbs. The racemes result in many yellowish-green flowers with dark purple markings all over the petals. These striking flowers generally last anywhere from two to six months, with some growers reporting flowers that last up to 10 months before they drop.

Younger Grammatophyllum plants need time to mature prior to flowering. If premature fertilization methods are used to induce flowering, the orchid will grow slower and not bloom. Mature Queen of Orchids may be induced to rebloom, however, and tend to flower every two to four years.

The flowers of the Grammatophyllum are large, averaging around four inches. The large blooms are almost flat, with lime-colored sepals and petals with dark purplish-brown markings. The blooms come from an inflorescence that is normally six feet long or more.

The large flowers of the Queen of Orchids are quite fragrant, which attract many pollinators. The Xylocopa bees are its most popular visitors, and the pollination process can cause the Grammatophyllum seeds to develop.

The Grammatophyllum orchid can be naturally found in Borneo, Indonesia, Laos, New Guinea, Myanmar, the Philippines, Thailand, and Vietnam. The large orchid’s native environment is the low tropical rainforests, where the perfect combination of the right levels of light, warmth, and humidity allows it to flourish. 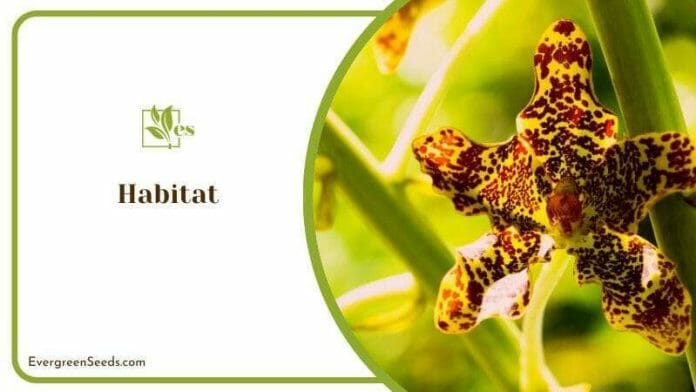 The Grammatophyllum is a gorgeous giant orchid with stunning leaves and strikingly beautiful flowers with a beguiling fragrance. The enormous epiphyte is surprisingly easy to cultivate and propagate as long as we remember to provide for its basic needs.

The Grammatophyllum is an awe-inspiring sight to behold when it starts to put forth fragrant flowers upon maturity under the right set of conditions for its caretakers. This is one instance where bigger is indeed much better! 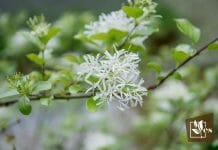 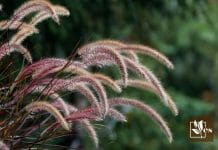 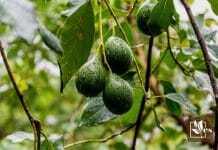