At some point, every gardener has to get rid of mushrooms in their mulch. 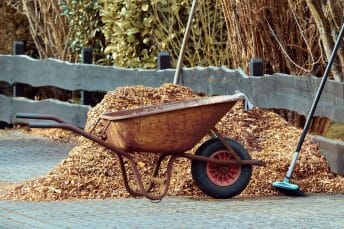 There are many ways that this can be done, and just as many common methods that don’t actually work.

In this guide, our gardening pros have taken a look at the best ways to kill the fungus growing in your mulch, while dispelling some of the common mushroom myths.

Why are mushrooms growing in mulch?

Mulch is rich in decaying matter, which makes it a perfect environment for mushrooms to grow in. The most common materials used in mulch are wood and bark chips, peat moss, pine straw, and even hay. All of these create an acidic substrate that fungi absolutely love. As a result, sooner or later you’ll wake up to grey mushrooms in your mulch even if you refresh it regularly.

So how do you get rid of mushrooms in mulch? In this guide, we used our gardening expertise to show you not just how to kill them, but also prevent them from coming back.

Read on to find out!

How to kill mushrooms in mulch

Removing mushrooms can be a difficult and time-consuming task, so it’s important to know which method works best.

Here are 6 of the most common ones:

Let’s take a closer look at each one and see how well they work.

Many mushrooms thrive in acidic soils, so the first step to combat them is increasing the pH of your mulch. The easiest way to do so is by mixing 1 tablespoon of baking soda in one gallon of water and spraying it over the infested areas.

Baking soda will not only increase the soil’s alkaline levels, but it is also a natural fungicide, effectively killing mushrooms in as little as 3 days.

Using fungicide for mulch may seem like a great way to get rid of mushrooms. However, the truth is that fungicides don’t kill mushrooms.

Most of the fungicide brands you can buy as a homeowner are used to control mold and mildew or to prevent a fungal outbreak. You can use fungicides to prevent mushrooms from growing in your mulch, but they won’t work on getting rid of them once they ‘take root’.

Commercial versions such as flutolanil and azoxystrobin work better at controlling an infestation, but they should always be applied by a professional.

Vinegar is a common household item that works wonders when it comes to killing mushrooms. The acetic acid it contains will kill off spores, mycelia, and damage the mushrooms themselves. You can make a simple yet effective anti-fungal spray by combining 1 part white vinegar and 4 parts water, then simply apply it to the mushroom-infested mulch.

Dish soap is another household item perfect for killing fungus. Like vinegar and baking soda, it is also safe to mix into a solution that can be used indoors and outdoors, and can also be applied if you have mushrooms in your flower beds. Mix 2 tablespoons of dish soap per 3 gallons of water, then spray it directly on the mushrooms.

Fertilizers work as your ally on two fronts: they promote plant growth, and they combat fungus growth in the mulch. Nitrogen-rich fertilizers help increase the time it takes to decompose organic matter, essentially decaying the mushrooms’ food source and forcing them to grow and decompose faster.

Although they don’t actually kill mushrooms, they are a great way to prevent an outbreak. For best results, avoid slow-release fertilizers, as they won’t have the same effect.

We often see it recommended, but does lime actually kill mushrooms? The answer is no, it does not. Although it increases soil pH, like baking soda, lime only slows down mushroom growth, without killing them.

Also, it can be dangerous to use: even when working with non-caustic lime, you should wear gloves, goggles, and a mask to prevent any injuries.

How to prevent mushrooms from growing in mulch

Prevention is often the most effective method of combating fungus growing in mulch.

So, make your mulch inhospitable for mushrooms using these 8 simple methods:

Let’s see how each method will help. 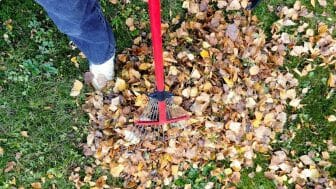 Pick up any leaves, branches, dead flowers, fallen fruit, and even animal droppings that have dropped on your mulch. These could contain fungal spores which will lead to a mushroom infestation. Leaving them on your mulch will also contribute to the acidity of the substrate, creating a more welcoming environment for fungi. Keeping your yard clean is also helpful if you want to prevent mushrooms from growing on your lawn.

Use a rake to ‘fluff-up’ your mulch once a week. This way, you are ensuring that the mulch is aerated and does not retain too much moisture, and it also breaks up any mycelia that might have started forming underneath. Often, it can take several weeks before you will see the actual mushrooms pop up in the mulch, and by then, you could have an extended network of ‘roots’ that will be more difficult to manage.

Using gloves, pick up and remove any mushrooms that you see growing in your mulch. It’s important to do this while the mushrooms are young, or as soon as you notice them in the mulch. If you wait too long, they will start releasing spores, which will easily blow in the wind and spread to other parts of your garden. You can throw the mushrooms directly in the garbage bin, or add them to your compost and leave them to decompose for at least 6 months.

If you have a serious mushroom infestation in your mulch, removing it will be the best choice. Use a shovel to scoop up the top of the mulch, and then rake the bottom to break up the mycelium growing underneath.

– Top the old mulch with a new one

A layer of mulch can take up to 7 years to fully decompose. Depending on how long you’ve had the mulch, you might need to top it up with a fresh one. Ideally, you should keep the layer of mulch around 2-3 inches thick. This should also be enough to stop weeds from growing without smothering your plants.

If you want to go the extra mile and prevent mushrooms from growing in your new mulch, now is also a good time to spray fungicides.

– Trim your trees and shrubs

Mushrooms prefer growing in the shade, so this is an important precaution if you have mulch around your trees and shrubs. Using loppers or pruning shears, trim the thin branches growing at the bottom of your plants, and use hand saws for the thicker branches. This way, you will also ensure that your mulch has time to dry a bit in between waterings, which will prevent it from becoming too damp.

Moisture is another important element that promotes mushroom growth. Mulch has excellent water retention abilities, and if you’re using bark or pine mulch, or even wood chips, you should be careful not to overwater it. Use a watering can and pour the water at the base of the plant, instead of using a sprinkler or garden hose, which could soak the mulch.

The kind of soil you have underneath the mulch is also important. Hard, clay-heavy soils don’t allow the water to seep through fast enough, and it can build up underneath the mulch. Overwatering can cause problems not just with fungal growth, but it can also cause root rot, which will kill your plants.

– Consider using compost instead of mulch

Compost is usually mixed into the soil, but you can also apply it as a top layer, as you would with mulch. Compost also contains organic matter that has already broken down, which means that there will be less decaying materials for the mushrooms to use as food.

Use mature compost that is at least 6 months old for best results. If you made your own compost and threw mushrooms in it, make sure to check for any white thread-like roots — that’s a sign of mycelium growing in it, and it could lead to a mushroom infestation.

Are the mushrooms that grow in mulch toxic?

Many of the mushrooms that grow in mulch are poisonous, which is why you should never eat them. There are dozens of fungus species that can grow in your garden. Some of the most common mulch mushroom species are ink caps, puffballs, slime mold, Amanitas, and even wood blewits and morels. True, some of them are harmless, and some are even edible. However, edible species often have deadly look-alikes, and even expert mushroom pickers can mistake one species for a toxic one. 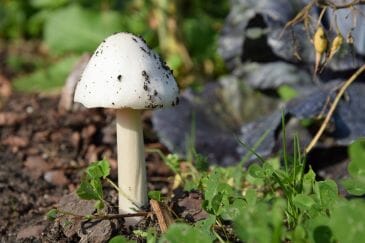 We strongly recommend that you don’t take any chances — it’s just not worth it. Dispose of the mushrooms in your mulch safely, preferably in the garbage. Or if you want to compost them, make sure that your pets or kids don’t have access to the compost bins.

This wraps up our guide on how to kill and remove mushrooms that grow in mulch.

Let’s take one last look at the key takeaways:

Keeping your mulch mushroom-free is easy with the right approach.

Our methods have been tried and tested and will work for both beginners and expert gardeners.

Let us know which one you’ve used by sharing your success stories below! 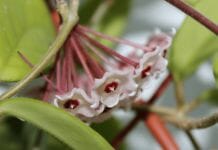 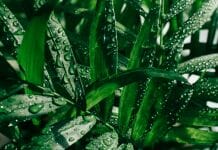 Cat Palm at Home: The Ultimate Guide for Beginners 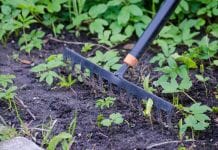 Best Pitchfork for Mulch — Top Products on the Market 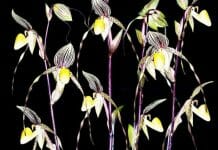