Killing large patches of weeds requires dedication and specialized techniques to be effective.

When gardeners are dealing with small patches of weeds, simply hand pulling is all that is necessary. But when faced with large areas that are not practical to hand-pull, you will need to make a plan for long-term weed control.

Types of Weeds and Growing Environments 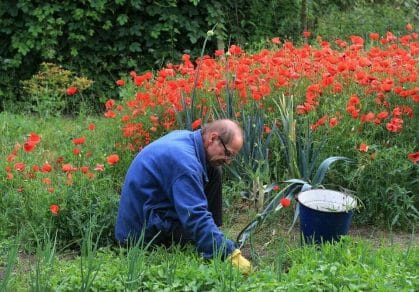 Every area of the world has specific growing environments, and virtually all of them are home to invasive weeds.

These undesirable plants choke out other plants, harbor ticks, and other pests, and spread seeds that are often covered in spines. Most weeds can be killed by commercially available herbicides when used correctly.

How to Kill Large Area of Weeds

The processes we are going to discuss here are useful to kill weeds in large areas.

Techniques for killing weeds will vary; 150 acres won’t be handled the same as 5 acres. The techniques here will work for the average person killing weeds in a large area in one day or less. 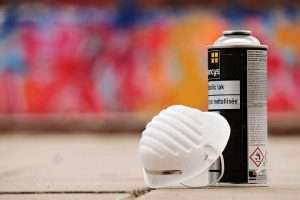 The most popular commercial herbicide in the world is RoundUp®. This product uses the chemical glyphosate along with other ingredients to kill weeds. Glyphosate works by inhibiting the absorption of necessary amino acids, causing a backup of waste and eventually, death. It only affects plants, not mammals.

Glyphosate is a systemic herbicide, meaning it is absorbed by the green parts of the plant and spread to the roots. Often, glyphosate is the best option for killing weeds in large areas because it can be quickly applied.

Glyphosate can be sprayed with a hand sprayer, or with larger, commercial sprayers. Within hours of application, plants begin to die but it can take several days for leaves to yellow.

Glyphosate must be applied correctly to be effective. Woody plants may require a stronger solution, while vine weeds may need to be treated multiple times. Apply herbicides like glyphosate when plants are growing and have yet to flower. The effects will kill the plant, but won’t prevent the germination of seeds.

Glyphosate isn’t safe to use around desirable plants without taking precautions. All plants will be killed by the herbicide, so it isn’t practical to use on lawns and over large areas of desirable plants.

RoundUp may potentially cause cancer when used frequently without safety precautions. Bayer AG, the current owner of the brand-name product has settled thousands of lawsuits relating to cancer potentially caused by its product. Glyphosate is currently listed as safe for humans by most health agencies.

Glyphosate-containing herbicides are expensive. The equipment necessary can also present a significant financial investment if a large area of the sprayer is necessary. It should also be noted that the use of glyphosate is increasingly restricted through legislation and many stores no longer carry the chemical.

The disadvantages of chemical herbicides are obvious. In recent decades, organic produce has become popular as an alternative to the use of herbicides. Some techniques work better than others, and the particular environment where weeds are growing makes some ideas impractical. 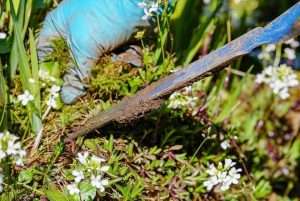 One method of killing weeds in large areas is the use of a harrowing disk and a tractor. This is a particularly effective method of eliminating woody weeds.

A disk is a series of metal plates drawn by a tractor that turn the soil. Using a disk breaks up the weeds, tilling the plant material into the soil, and fertilizing it. This method may take several growing seasons of regular disking to prevent weed growth.

There are a number of other effective mechanical methods, including lawnmowers, brush hogs, and weed whackers that can make killing weeds in large areas easier.

Combining several types of mechanical weed killing methods with other techniques is the best plan for long-term weed control in large areas like fields and pastures.

The use of a disk is not practical in rocky areas or in places with large trees. The disks will quickly become damaged from striking rocks and roots.

Commercially available products are available to prevent weed growth. Called by a variety of names, including landscaping fabric, these products all work the same way. When the fabric is spread over the area weeds are not wanted and secured, sunlight will not be adequate for plant growth, eventually killing the plants. This works best when the ground is bare. Established weeds should be cut down prior to using a weed control fabric.

In warm areas, plastic drop cloths and tarps can effectively be used to remove large areas of weeds. By covering the weeds in plastic, then securing the sides, moisture and heat are trapped, killing the plants in the process.

It can take six to eight weeks to use plastic sheeting or tarps to kill weeds in large areas. Seeds will continue to germinate, so this should be considered a short-term solution to large areas where desirable plants will grow.

Putting a weed control fabric under pathways and gravel areas is a great way to prevent weeds from growing in large areas like driveways and carports.

In many places, herbicides, tractors, and tarps simply won’t work. Either the terrain is not suitable or the presence of desirable plants makes these methods impractical.

A mixture of table salt and white vinegar, with a few drops of dish soap added, can make an effective solution for killing weeds in large areas.

Salt dries the plant, while vinegar is an acid and literally burns the plants. The dish soap breaks the surface tension of the vinegar, speeding up the absorption of the mixture. This is an effective method when targeting specific areas where you don’t want lots of harmful chemicals. This method should be applied several times to be most effective.

Do not use Epsom salt, though. Epsom salt is magnesium sulfate, which plants can use to grow. Table salt, or sodium chloride, can’t be used by plants. Long-term weed control in areas like gravel driveways can be accomplished by spreading salt.

This method should only be considered for permanent weed killing, as the soil will take many years to recover.

If you are dealing with particularly rough and rugged terrain and you don’t want to use chemicals, goats, ducks, and chickens are some of the most effective ways of controlling weeds.

Goats are grazing animals and will eat even the toughest and nastiest weeds right down to the ground. Goat droppings are a useful fertilizer, and there are lots of other ways to make owning goats a valuable decision. Goats are frequently used for killing large areas of weeds in organic wine grape production.

Chickens and ducks will eat just about everything above and below ground. Chickens do best in dry areas, while ducks require a fresh water supply. Both species will eat leaves, branches, roots, and seeds of most types of weeds. They also will eat bugs, insects, and other critters. Chickens are known for killing and eating mice. Chicken droppings can be used as a soil amendment once properly treated, while duck droppings are ready to use.

The obvious downside to foraging animals for large areas of weed control is that they are indiscriminate and will eat virtually everything. Corralling these animals and preventing them from eating your vegetables and other plants instead of weeds limits the usefulness of animals for weed killing in large areas.

Propane torches can be effective for killing weeds. Rather than scorching and burning the entire plant, the best technique is to scorch the flowers and upper parts of the plant. This is quick and prevents accidental fires.

The scorched part of the plant can’t continue to grow, and rather than send off new shoots, the plant dies. Propane torches are also effective for clearing young weeds just sprouting, but you should avoid overheating the ground to prevent killing desirable organisms.

There are lots of excellent ways to kill weeds in large areas, many of which are best when used together.

The best decision you can make is to create a plan for long-term weed control. You should start by killing and removing weeds from undesirable areas, then plan to prevent new growth.

Many types of weed seeds will remain viable for many years, and certain types of weed roots can survive for decades without sprouting. 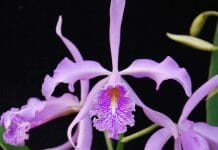 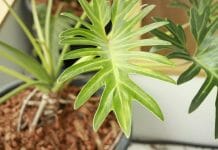 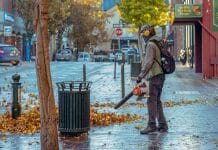 Oregon bl300: Advantages and Drawbacks of this Battery Leaf Blower 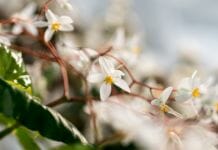