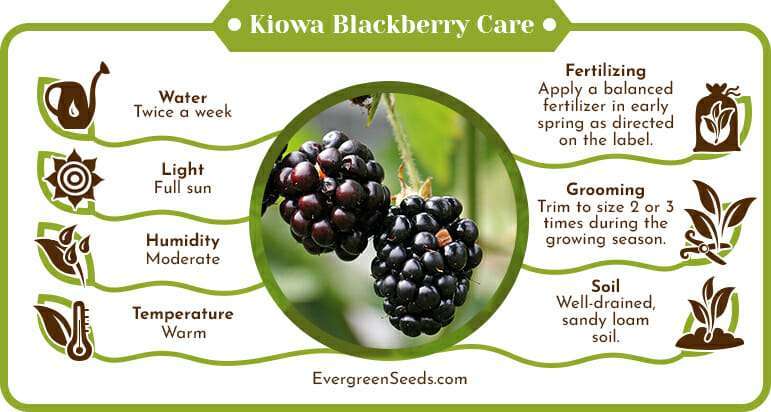 Following is a concise guide to growing and caring for this tasty, giant fruit that is fantastic in wine, juice, syrup, jams, jellies, or a delightful cobbler.

Blackberry species are native to North America, and the Kiowa hybrid blackberry was developed in 1983 at the University of Arkansas. The erect growth habit of this variety with large blackberries allows for easy berry picking. The fruit is borne on the canes in one to two years from planting, and within two years, the plants are in full production. 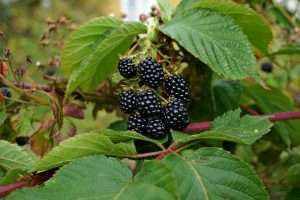 The flowers of the Kiowa thorny blackberry, Rubus x “Kiowa,” are pink or white in color and have an open rose-like form. The Kiowa’s self-pollinating, single blossoms grow five to ten per cluster with two clusters per upright stem. They have an early and lengthy bloom period that results in a long harvest season of about six weeks, giving you plenty of opportunities to enjoy them.

Kiowa blackberry plants have a perennial root system and biennial canes, similar to their relative, the raspberry. First-year primocanes do not flower and produce fruit; second-year floricanes produce flowers and then die after fruiting in early June.

Primocanes grow at the same time as the floricanes are fruiting, resulting in fruit production every year. Yields of these giant Kiowa blackberry fruits are up to 60 pounds for every 20 feet of row or 10,000 pounds per acre.

How to grow Kiowa blackberry plants

Kiowa blackberry plants are of the thorny variety, which is typically more productive and have larger fruit than thornless blackberries. However, be cautious of the very sharp thorns during the berry harvest. Since ten of these berries will fill a half-pint container, it is worth it to pick carefully!

Plant the Kiowa blackberry shrubs in the spring in a full sun location with well-drained, sandy loam soil. They grow well in an 18” wide hedgerow consisting of three to six canes per foot. If you do not favor a hedgerow planting, another option is to plant them two to four feet apart in rows that are eight feet apart. That allows other crops to be grown in the space between the rows if you desire.

This hybrid is hardy in zones 5 – 8. These sweet but slightly tart blackberries grow best in soil with a pH level from 6.0 to 6.8. The bare-root stock should be planted in holes about twice as wide as the planter they came in and at the same depth.

The space around the plants should be filled with soil, watered well, and then topped off with a thick layer of mulch to prevent weeds and preserve soil moisture.

How to care for a Kiowa blackberry plant

Water is critical for the establishment of Kiowa blackberry and during the time that fruit is ripening. 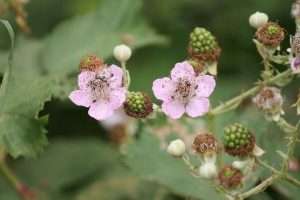 Irrigation at the base of the plants at the rate of one to two inches each week throughout the growing season. This means it is best to water twice a week for half an hour each time, applying about two gallons of water in total. Of course, irrigation should occur more often during dry periods.

Irrigation should begin in March or April. Place drip irrigation lines beside the plant or attach them to the trellis. Pay special attention to watering during bloom time and fruit development. Reduce watering in September so that the plants can harden off for winter.

Kiowa blackberry is one of the easiest and most vigorous of fruits to grow. However, the plants still benefit from mineral supplements. Apply a balanced fertilizer in early spring as directed on the label. Alternatively, you can apply compost or manure in the early winter instead to provide the required nutrition.

Ideally, the best strategy for planting is to start Kiowa blackberry plants in a weed-free area. Choose a sunny site with optimal soil type and pH. Poorly drained areas lead to weed problems. Good site selection will reduce the number of weeds in the blackberry patch and decrease the labor and the chemicals needed later.

Mulches of organic material help with weed control. Fabric weed barrier material can be helpful with weed control and with keeping voluntary canes from coming up in places that they should not. Both types of weed control also help soil moisture retention. Use the selective herbicides in established Kiowa blackberry patches to keep the weeds down.

The canes of the Kiowa blackberry reach six feet in height and have a spread of eight feet, so pruning the canes is an important part of their care. This consists of clipping the primocanes in the second year of growth to maintain an upright shape. Trim the primocanes to 40″-46″ in height two or three times during the growing season. Pruning this way encourages lateral branch growth and more fruit production of these huge blackberries the following year.

In the late winter, when the worst of the cold weather is over, prune the laterals back to 12” in height to remove the deadwood. This treatment will cause the plants to produce more giant berries. Additionally, pruning will keep the bush shape and allow mowing around the plant.

Kiowa blackberry plants can be trained on a trellis in a system called trellis production using primocane suppression (TPUPS). Two wires are strung at three-foot and five-foot heights on posts that are spaced twenty feet apart. Two healthy primocanes from each blackberry plant are selected and attached to the wires. Remove all other shoots down to the ground.

Attach one primocane shoot to the bottom wire and the other to the top wire. Biodegradable plant ties and string may be used for tying or plastic ties; if the primocanes are long, they may be wrapped rather than tied. The runners should not be tied too tightly so that growth is restricted in the following year. There should be plenty of room available for the stem to expand.

Once the primocanes are wrapped around the wire, nipping the apical tip of the canes will remove apical dominance and allow the plant to send out lateral shoots. This results in more blackberry stems, flowers, and ultimately fruit. Generally, tip nipping of primocanes occurs in early to mid-July. Prune excess shoots are out and train the primocanes of one plant to meet the primocanes of a neighboring plant to form the trellis.

Kiowa blackberries are related to raspberries and share similar diseases and insect pests. Many of the diseases can be prevented by good management practices, such as regular pruning and removal and burning of the clippings. It is always a good idea to bleach tools before trimming blackberry floricanes to reduce the spread of disease. If the plants are trellised, it is best to take leaves off the bottom of the primocanes and prune them up to within 6” of the tie for disease prevention.

One common problem for all blackberry plants is a fungal disease called anthracnose, which causes uneven ripening of the berries and reduced fruit size and quality. It may also weaken the canes enough that they do not survive the winter. Removal of old canes in the dormant season is the best for prevention. Treatment of the fungus is a copper sulfate spray applied in the dormant season. 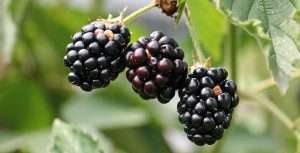 Threats from insect pests can also be reduced by cultural practices such as wide spacing, pruning, and removing branches near the ground to promote airflow. A serious insect pest of blackberries is the spotted-wing drosophila.

This insect lays eggs under the soft skin of ripe fruit, ruining the commercial value of the fruit once the larvae hatch and grow. Regular picking of the fruit a few times a week will help reduce the damage inflicted by this pest.

We have covered a lot of information on Kiowa blackberry growth and care. These giants among blackberries are certainly worth a try in your garden.

Here is a summary of the key points that will help you grow these enormous berries:

Once the Kiowa blackberry is planted in good sandy loam soil, simple fertilizing and regular watering are needed to grow them well. Pruning is an important cultural practice to prevent disease and insect pests and ensure the crop is optimal. 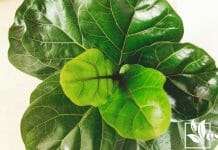 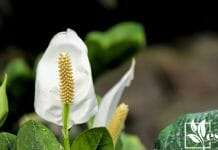 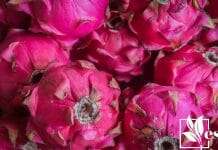 Blue Dragon Fruit: Is This Variety a Reality or a Myth?