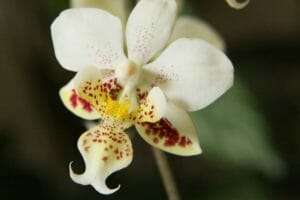 Phalaenopsis stuartiana naturally grows in the hot humid forests of Mindanao, Philippines. This enigmatic orchid is known for its mottled leaves and interesting flowers that grow from a long, pendant inflorescence. Faintly fragrant, the flowers are often white with dark maroon spots and a curious growth that resembles a mustache.

Growing Phalaenopsis stuartiana has become quite a habit for many tropical orchid growers. If you are interested in growing this plant at home, then this article is what you’ve been looking for!

The Phalaenopsis stuartiana grows to a medium height of about 2 to 3 feet. Under favorable conditions, these orchid species can exceed their normal size. As with most Phalaenopsis orchid plants, this particular species can lose some of its leaves when the flowering season approaches, thus reducing the overall size of the plant.

Phalaenopsis stuartiana growers need not worry though, as leaves will reappear after the flowering seasons.

Stuart’s Phalaenopsis has mottled leaves, with white circular marbling patterns that captivate most growers. It has short stems covered by overlapping leaf bases that carry curved, elliptical, fleshy leaves. The stem can range from 14 to 16 inches in height. Usually, the bottom sides of the leaves are tinged with a reddish crimson hue, while the topside tends to be silverish-gray.

The Phalaenopsis stuartiana’s roots are plump and white, with a green tip. Interestingly, the true color of most orchids’ roots is green. When they slowly mature, a white substance slowly covers them as a protective sheath from harsh elements, pests, and diseases.

Stuart’s Phalaenopsis flowers bloom almost all year round in the plant’s native habitat. The flowers are often white, speckled with maroon spots on the lower half of the inner whorls. They are also shaped like an upturned mustache. White and cream are predominant colors in most Phalaenopsis stuartiana. Some varieties produce pale yellow flowers with similar maroon markings.

The flowers of the Phalaenopsis stuartiana are faintly fragrant, slightly sweet, and floral in scent. Some varieties produce little to no fragrance. For growers, this is not much of an issue, as the main attraction of this particular orchid plant is the appearance of its flowers.

Being a native epiphyte in the warm humid forests of the Philippines, the Phalaenopsis stuartiana thrives near the southern Mindanao parts of the archipelago, specifically in the Agusan and Surigao provinces. Normally found growing near bodies of water, these orchids can also live in coastal forests. In these areas, the salt spray of the seawater lends additional humidity to the orchid plant.

Stuart’s Phalaenopsis is a small to medium-sized epiphytic plant. Sometimes, it can be lithophytic. In its native habitat, it grows in shady areas where humidity is high, allowing it to happily thrive and flower. In cultivation, it is often grouped with other orchids with similar growing habits and requirements, making them a popular choice for many orchid collectors who enjoy adding exotic varieties into their gardens.

The Phalaenopsis stuartiana enjoys a low light level of 10,000 to 12,000 lux. As it is endemic to shadier locations in the tropical Philippines, the orchid has evolved successfully to thrive in these conditions. Exposure to bright direct sun can cause leaf burns to the mottling patterns of the orchid’s leaves, where they turn yellow before dying off from leaf burn.

Water Stuart’s Phalaenopsis can be quite rewarding for many orchid growers. This orchid enjoys frequent and abundant watering during its active growth periods in tropical regions. In general, the higher the light and heat intensity, the more frequent the watering must be. Experts recommend using warm to lukewarm water. Distilled or rainwater is ideal.

In colder regions, it is advisable to keep the watering frequent but not overly abundant, especially when the light and heat levels are low and can fluctuate drastically. The most important indication is to keep an eye out for the moisture level of the orchid’s substrate or potting medium. Phalaenopsis stuartiana orchids prefer high moisture levels but not overly wet conditions, which can encourage fungus and root rot.

The Phalaenopsis stuartiana enjoys warm balmy temperatures, as it has gotten accustomed to the warm tropical settings of its native environments. For growers in tropical locations, taking care of these orchids will require minimal effort.

For cultivators in colder temperate conditions, it is important to note that Stuart’s Phalaenopsis orchids enjoy daytime temperatures of 80 to 86 F. The orchid is used to nighttime temperatures of 68 to 73 F. Growers in temperate regions would benefit from creating controlled conditions for these orchids to keep them growing and flowering successfully. 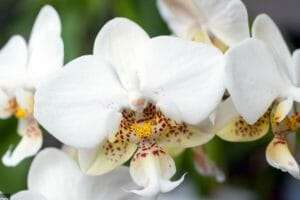 The Phalaenopsis stuartiana is adaptable to growing in pots or mounted on bark slabs. It is an epiphytic and lithophytic species. Thus, it prefers permeable substrate with enough water retention but also quick drainage. Materials such as sphagnum, perlite, charcoal, bark chips, and coconut husks are ideal mixes for potting medium and substrate. For bark mounts, the Phalaenopsis stuartiana enjoys a mixed substrate. Its roots can also be attached to a bark slab mount.

Stuart’s Phalaenopsis can be repotted any time of the year, although it is most advisable to repot the plant once the roots start to grow over its container. The best indication for repotting Phalaenopsis stuartiana is when new green tips emerge from the bottom of the plant and from the substrate. The new container should be larger than its current container to accommodate the upcoming growth periods.

Due to growing in hot, humid conditions, the Phalaenopsis stuartiana needs a high level of humidity. In its native habitats, the tropical climate naturally provides high levels of air moisture. In cultivation, growers are advised to create a humid condition, with an average humidity level of 80 to 90 percent throughout the year.

Aside from the high humidity level, strong air movement is required. Growers are encouraged to allow for strong airflow and ventilation when growing Stuart’s Phalaenopsis to prevent fungal and bacterial infections from stale moist air.

Fertilization of the Phalaenopsis stuartiana is ideal during its active growing period. A solution of a quarter to a half-strength dose of the recommended orchid fertilizer is recommended. This can be applied once a week, or once every two weeks. The best fertilizer formulation for the active growing phase is one with nitrogen, phosphorus, and potassium in equal parts. After two months, a high-phosphorus content fertilizer is recommended to coax the orchid into flowering.

In its native home, the Phalaenopsis stuartiana does not really have a true resting period, as it can always enjoy warm weather and abundant moisture. In colder temperate regions, however, resting periods can occur, especially after the flowering stage and during the colder winter months. The darker days and longer nights encourage the orchid to rest for the next active growth period.

During this stage, watering should be reduced, and fertilization should be stopped altogether. An indication of the ideal moisture is the slight dampness of the substrate and roots, which should not be allowed to dry out. Misting will help keep the moisture level in the substrate at ideal standards while providing the right amount of humidity in the air.

Cultivation of the Phalaenopsis Stuartiana

Stuart’s Phalaenopsis is popularly propagated through plant division. While using Phalaenopsis stuartiana seeds to cultivate new plants can be exciting for many growers, the viability and yield count can be quite low. Also, there is uncertainty in the cultivated orchid’s plant properties. 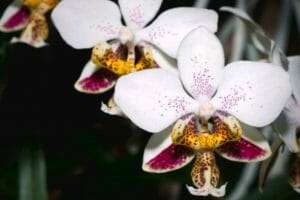 The Phalaenopsis stuartiana orchid is an intriguing species of the Phalaenopsis family. The distinctive shape and color of this moth orchid have entranced many local and international orchid collectors. This encouraged them to cultivate and propagate these beautiful blooms for other future lovers. Let’s go over what we’ve learned so far about this pretty orchid.

The Phalaenopsis stuartiana can be a wonderful addition to any orchid lover’s collection. This pretty plant from the Philippines will bring hours of joy when it produces its curtain of flowers for its loving caretaker. Many will find that growing this orchid is one of the most rewarding moments in their gardening hobby! 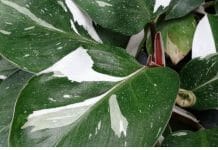 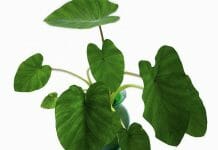 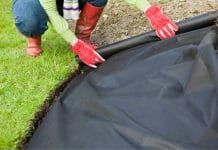 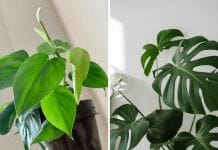 Philodendron vs Monstera: Main Differences and How To Tell Them Apart