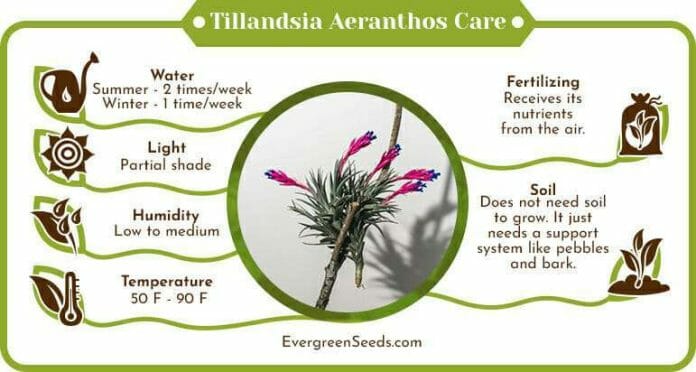 Tillandsia Aeranthos has a bright appearance that cannot pass unnoticed, especially in full bloom. This plant can light up any space where it is placed, no matter how dull the location may be.

What Is a Tillandsia Aeranthos?

Tillandsia Aeranthos is an epiphyte that belongs to the Bromeliaceae family of plants. This plant is also known as the Aeranthos Air plant, a name that is derived from its scientific name as well as the fact that it is classified among air plants.

Tillandsia Aeranthos is one of the air plants that survive with light watering. We recommend that you water your plant twice every week during summer. In winter, water the Aeranthos air plant once every week or even once in 10 days. To ensure that you don’t overwater your plant, put the water in a spray bottle and lightly mist it.

Soaking is only a good idea in summer since the growth rate of the plant is higher during this time. Besides, transpiration is higher in summer, so water is unlikely to accumulate on the plant. To soak your Tillandsia Aeranthos, submerge it in a bowl full of water. Gently shake off any extra water and leave the plant to dry naturally as aided by air currents.

The watering requirements highly depend on the humidity conditions in the region where you stay. Another important thing to note 一 never allow water to sit on the foliage of your plant for more than four hours as this will lead to rotting.

There is no harm in giving your Aeranthos air plant full sunlight in the mornings and late afternoons. In the hot summer afternoons, put your plant in partial shade so that it is not scorched by the excessive heat.

If you’re growing your Tillandsia Aeranthos as a houseplant, you can place it on a spot where it can receive light from a south- or north-facing window with a light curtain.

Place your plant even closer to the windows during winter to receive the maximum possible amount of light. If you keep your Aeranthos air plant in complete shade, it will weaken and ultimately wither. 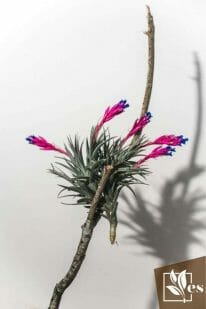 The fact that Tillandsia Aeranthos is an air plant typically means that the plant does not require you to prepare or purchase any potting mix for it.

Air plants receive their nutrients from the air, not from any soil medium.

What you just need is a support system where the roots of your Aeranthos air plant can attach.

This could be solid that does not retain much moisture, like pebbles and bark.

Tillandsia Aeranthos will certainly thrive well in a temperature range of 50 F and 90 F. In winter, the plant can still manage temperatures around 59 F.

Tillandsia Aeranthos does not have problems with extreme changes in temperatures. You can move the plant into an environment with hot temperatures from one that is frosty and vice-versa without it showing any adverse effects.

Just make it a point to maintain the temperature ranges conducive to the plant’s growth whenever possible.

The humidity needs of the Aeranthos air plant are easy to attain and maintain. The plant does not require high levels of humidity for survival. Simply put, Tillandsia Aeranthos is actually adapted to thriving in environments with dry air.

Ideally, the plant performs well in low to medium levels of humidity. Too high humidity levels can negatively affect the plant’s health.

Tillandsia Aeranthos is happy when it is placed where there is maximum possible aeration. Better airflow and lower moisture are a great combination that is supportive of the survival of the Aeranthos air plant. Ideally, place the plant close to an open window or door. The more the aeration, the less the likelihood of moisture accumulation on the plant’s leaves.

Propagating Tillandsia Aeranthos seeds is a feasible process. However, this is a lengthy process, which spans between two to four years.

Wait for the flowers of the plant to die and dry out. The seed capsules will then open up, allowing you to collect the brown seeds of Tillandsia Aeranthos. Soak the seeds by placing them in a container that has enough water to cover the seeds.

You can close the container to generate some heat that can expedite the germination process but be sure to uncover it regularly for aeration.

The seeds will germinate within a few weeks. At this point, you can move them to their substrate. You can use a cheese-like fabric as the substrate that gives the plant a point of attachment void of too much moisture.

Hydrate the original plant by placing it in a bowl or water bath full of water for about three hours. Use your finger to gently open up the leaves of your plant to uncover the pups that are at the base of the plant. With a gentle pull, separate the mini-plants from the parent plant.

You can then mount the new plants on a separate substrate from the mother plant. Mist these new plants once each day, either in the morning or afternoons. Please note that Tillandsia plants are nocturnal, so they respire during the night.

If you mist your Aeranthos plant at night, pores are clogged, and so their ability to absorb carbon dioxide for respiration is compromised.

It is unlikely that you will have many problems with your Tillandsia Aeranthos. However, be on the lookout for snails and slugs if you keep your plant outside during summer. You also need to check your plants for sapsuckers like mealybugs and aphids constantly.

There are many ways to deal with slugs and snails that visit your home garden. You can use liquid baits like iron phosphate, beer, grape juice, or a mixture of yeast and sugar or honey.

Fill a bowl with any of these liquid baits so that when these mollusks come out of their hiding spaces, they are attracted by the bait and eventually drown. Dry baits like methiocarb also work well in eradicating slugs and snails, though you need to be more careful as these pests can also kill pets and humans.

Some things that you use in your home can act as repellents for snails and slugs. Some of such home-available ingredients are ginger, coffee, garlic, mint, sage, sage, and vinegar. Crush these and place them where they are reachable to the arthropods. You can even use sandpaper, eggshells, or lava rock.

Another simple way to reduce the activity on your plant by snails and slugs is by changing your watering schedules. Instead of watering your Tillandsia Aeranthos in the evenings, do so during the mornings. Snails and slugs enjoy relatively wet environments so leaving your home garden a bit dry during the nights will make the place less favorable for the molluscs.

Mealybugs and aphids can be very destructive on your Tillandsia Aeranthos as they drain the vitality of your plant by draining its sap. Aphids are easier to treat when they are still in small numbers. Giving these bugs a little more time on your plant will see them multiplying to large infestations in no time.

It is important to isolate the affected plant from the rest of the plants in your home garden because aphids and mealybugs can easily spread between plants. Make sure to disinfect the space where your plant was using 70 percent alcohol.

Using the soaking method for watering your Tillandsia Aeranthos also helps to detach the pests from your plant and kill them. When they are still in lower infestations, both mealybugs and aphids can be dabbed using cotton balls that are wetted with 70 percent isopropyl alcohol.

Neem oil works well for both low and high infestations of both pests. You can also buy an insecticidal soap and use it to spray your plant. Since aphids and mealybugs are both sucking pests, systemic pesticides like imidacloprid that get to the sap of your plant are an easy fix for these pests. Once these pests suck the sap with the pesticide, they cannot survive.

Facts About the Tillandsia Aeranthos

The purple flowers of the plant are surrounded by bracts, which are modified leaves. These bracts are usually vividly colored with bright versions of pink or red.

Tillandsia Aeranthos is native to some regions of South America, including Paraguay, Brazil, Uruguay, and Argentina. 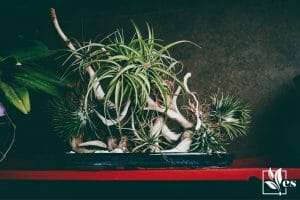 Well done for getting to the end of this article! You are now just one step away from being a guru in taking care of and propagating Tillandsia Aeranthos.

Let’s do away with this final step here and now by going through the main points again:

The final step is over, too! You are now free to go and explore the care techniques for Tillandsia Aeranthos, starting from what you learned from this article. Best wishes on your escapade to care for and propagate the Aeranthos air plant! 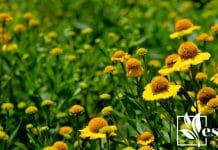 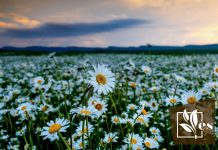 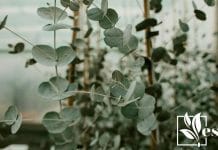