There are several pests that could be eating pepper plants at night. Pepper plants (Capsicum annuu) belong to the nightshade family (Solanaceae).

Pests that feed on nightshades, such as potatoes, may also visit pepper plants.

Read on to find detailed answers to “what is eating my pepper plants at night.”

What Is Eating My Pepper Plants at Night? 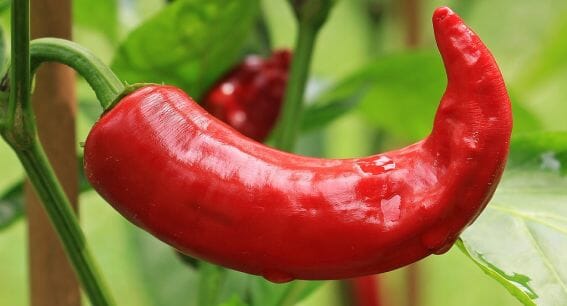 Insects are the most common pests that eat pepper plants at night. These are most commonly plant lice (aphids) and worms, which suck the sap and burrow into fruit. Moth caterpillars and beetles can also eat the leaves. You can narrow down the pest based on the damage to your pepper plants.

When aphids feed, they leave sticky residue on the plants, which is the plant sap residue. Caterpillars and beetles will leave semi-circles of damage on leaves. Worms can burrow into pepper fruits and eat out their substance. Those four can overwhelm and destroy entire plots of pepper plants if you leave them be.

Animals eat pepper plants but most mammals would rather not. Carnivores will avoid pepper plants at all costs but herbivores might give them a try. Omnivores may develop a taste for both spicy and sweet pepper plants.

The reason why most animals won’t eat pepper plants is solanine. It’s a poison that deters insects, found in all plants from the nightshade. Other nightshade poisons include nicotine, also found in the pepper plant.

What Is Eating My Pepper Plants at Night? List of Pests

Aphids are small black, green, red, or brown bugs, about 1–2mm in size and sometimes winged. These winged aphids migrate to a suitable nearby plant and infest it. The aphids winter on a nearby peach, plum, or cherry, whose leaves begin to curl due to their presence. The curled leaves of trees from the Prunus family are a tell-tale sign of aphid presence.

Aphids fall prey to all types of ladybugs but are resistant to many poisons. Imidacloprid is a man-made nicotine-like poison for insects that works well on aphids. It won’t harm useful pollinators, such as bees or butterflies. Be careful with using too powerful insecticides or you’ll kill useful bugs too.

A sweet liquid attracts adult aphids, which can drown in it. Pour some water, vinegar, and brown sugar into a water bottle to control aphids. Place it near the aphid-infested plant and let them drown. You can also plant stonecrop and cosmos nearby to attract aphid predators.

The beet armyworm is a white-gray moth with an average 25mm wingspan. The moth’s larvae are green or brown caterpillars. They emerge from hairy, light-green spherical eggs and change as they feed on foliage. These larvae can create webbing on leaves, which is a tell-tale sign of their presence.

This moth pest is weak to natural insecticides, such as spinosad and BT-aizawai. If you use petroleum oils, you can destroy the eggs. As an alternative, if you treat the plants with neem (Azadirachta indica) oil, you can harm the larvae. And, if all else fails, you can remove the moth by hand and drown it in soapy water.

You can set pheromone traps to distract the moth. For larger moth invasions, you need to inspect the plants for egg clumps and target them. Red imported fire ant (Solenopsis invicta) will readily feed on the moth’s eggs and larvae. In a greenhouse, you can use fungi, bacteria, viruses, and other predators of the moth.

These moths can feed on over 160 plant types, including pepper plants. They lay single yellow-white or greenish eggs on leaves. Larvae are white and become green white-striped caterpillars as they grow.

Neem oil is an effective deterrent against the cabbage looper but rotenone not so much. Bacillus thuringiensis (BT) can kill the moth at all its stages. Sugar traps that have insecticides and phenylacetaldehyde work too.

Pheromone and blacklight traps disrupt the cabbage looper moth mating. Still, they’re not enough by themselves.

The Colorado potato beetle is orange and black. It has 10 stripes on its back, hence the latter part of its Latin name. This beetle lays yellow eggs underneath the leaves, which is a tell-tale sign of its presence. Larvae hatching from the eggs are orange with black spots.

The Colorado potato beetle is extraordinarily resistant to chemicals. It’s quick to adapt to poisons and you have to pick it off or burn it using a flamethrower. Wear gloves if picking the beetle off since it can squirt irritants. Drown the adults and larvae in soapy water; crush eggs with a tool or your foot.

The European corn borer is a white worm with a brown head that prefers sweet peppers. It leaves small black clumps of feces as it feeds. The borer lays a mass of at least 20 eggs in a clump. They hatch, feed, grow, and become moths, at which point they migrate to corn.

Pesticides such as Entrust, Confirm, and SpinTor work against the European corn borer. Pyrethroids, such as sumithrin, work too.

This tiny black beetle can jump from one nightshade to another. It lays eggs in the soil, which hatch and feed on the plant. Larvae are white with a brown head and three pairs of legs. They often leave circular holes in the leaves.

Pyrethroids are effective against flea beetles. Control flea beetles by destroying pepper plant remainders. Shred them if you must. Eliminate nightshade weeds, such as horsenettle, which is where flea beetles gather.

This is a red fly with three yellow lines on its back. The fly lays its eggs into the pepper fruit. When they hatch, white larvae feed on the fruit and emerge. The maggot prefers round, blocky peppers rather than long and slender ones.

Clear the field of debris and rotate the crop often. Remove damaged fruit and avoid fields with a history of pepper maggot presence. Plant round, blocky peppers on the field perimeter and observe for signs of egg-laying. Time the insecticide spraying when you see scars or punctures on the peppers.

This is a small, black bug with a long snout. It hides in pepper plant flower buds, feeds on them, and destroys the fruit from the inside. Pepper weevils feed all year long and leave small white eggs on nightshade plants. Weevil’s larvae are white with brown heads.

Insecticides kill pepper weevils but only at adult stages. Early, vulnerable stages of the weevil are most often hidden inside the pepper fruit. Insecticides that kill the weevil often also harm bees.

You have to properly remove any pepper plants infected by weevils. If you only set the plants aside, weevils can grow wings and come right back. Take extra care near pepper processing or packaging areas.

These minute bugs suck the sap from leaves, which curl and develop white spots. The spots look like someone sandblasted the leaf. Spider mites have two spots on their backs and lay up to a hundred spherical eggs. Dry, dusty conditions foster the growth of spider mites.

Shake leaves over a sheet of paper and use a magnifying glass to confirm that it is mites. Use abamectin, bifenthrin, or a special anti-mite poison, such as Acramite. Use no more than once every seven days.

What Are the Best Pesticides for Pepper Plants?

The number one recommended pesticide for pepper plants is — soapy water. It’s cheap and easy to make and doesn’t harm useful bugs. The soapy layer covers the pepper plant and ruins the appetite of aphids, beetles, and moths. Squirt one tbsp of additive-free soap mixed in a liter of water over pepper plants.

When soapy water no longer works, you can use botanical pesticides. These include carbaryl, which is toxic to all other life and pollutes the environment. Use it no more than once every two months. Remember to spray the leaves from all sides, including the underside.

Conclusion: What Is Eating My Pepper Plants at Night?

In this article, you’ve learned that:

Insects are a constant danger to your pepper plants. They are tiny but leave around tell-tale signs of presence and activity. If something is eating your pepper plants, act quickly and the damage will be minimal. 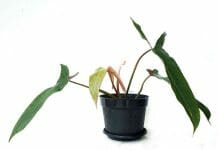 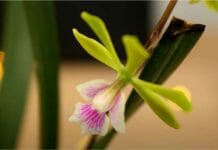 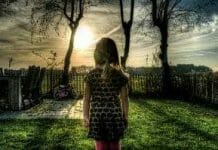 How to Grow a Shady Lady Tree – Tips for Indoor... 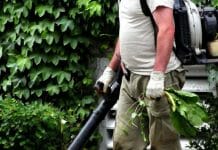 Husqvarna 125bvx Review: A Powerful Blower/Mulcher/Vacuum for Residential Use