Knowing all the types of pumpkins is essential for cookaholics and decoration addicts. Every type of pumpkin, in fact, will have a different color, taste, pulp texture. As such, you’ll realize that non every type of pumpkin is ideal for every recipe or purpose. 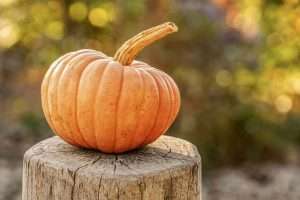 This guide to the main types of pumpkins presents an overview of the different pumpkin groups, and then it gives you details on size, shape, color, and uses for 40 individual varieties of different colored pumpkins.

Pumpkins are a diverse group of fruits – and yes, a pumpkin is a fruit, according to scientists who study plants. By some counts, there are over 150 separate species of pumpkin plants and many hundreds of varieties of every shape, color, and size you can imagine.

Let’s sort them out.

What Are the Different Kinds of Pumpkins?

There are four main types of pumpkins: Pepo, Moschata, Maxima and Mixta. These large groups are further divided in dozens of species.

In general, pumpkins belong to the plant family called Cucurbitaceae, or cucurbits for short. Cucurbits contain four sub-groups with all the different pumpkins we use for Jack-o’-lanterns, pumpkin pies, and winning prizes at county fairs.

Cucurbits include a total of around 960 distinct species of plants, including melons, summer squash, cucumbers, winter squash, decorative gourds, and all varieties of pumpkins.

Here’s an overview of the four main types of pumpkins:

Small pumpkins generally weigh between 2 and 10 lbs. Mini pumpkins are an especially small type, weighing only a pound or two.

Medium-sized pumpkins weigh between 10 and 25 lbs.

Large and jumbo weigh over 25 lbs.

Each pumpkin group contains cultivars (also called varieties) with fruits suitable for pies and other types of cooking, and decorative uses, such as carving, painting, or displaying ‘as is’ for its natural beauty. Some varieties are right for more than one purpose. 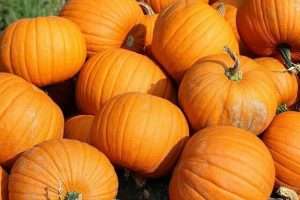 Pepo species of pumpkin are thought of as the “true” variety of pumpkin. These are probably the pumpkins that come to mind when most people think “pumpkin.”

A classic example of a Pepo pumpkin is the Connecticut Field cultivar, a Native American heirloom people have grown for hundreds of years and continue growing today. 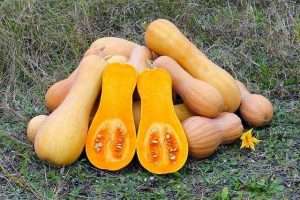 Many pumpkins in the Moschata group are more oblong rather than round in shape. They also often have tan skin instead of the bright orange or yellow exterior of other pumpkin types, and the stems are thick with deep ridges. Moschata plants do well in areas with hot and humid weather.

The Moschata pumpkins deserve attention if you love pumpkin pie and other baked goods containing pumpkin pulp. Moschatas include the traditional cultivars used in canned pumpkin products and many pumpkin pie recipes.

People also call some Moschata varieties “cheese-wheel” pumpkins due to their slightly squat shape, resembling a round of cheese.

Another well-known Moschata species that’s not a regular pumpkin is butternut squash, a tasty and nutritious winter squash you can bake and use in soups. Long Island Cheese is a famous pumpkin pie cultivar of the Moschata cucurbit group. 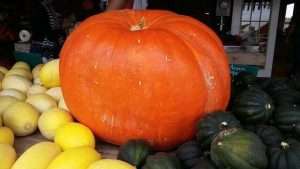 Maxima pumpkins usually have yellower skin than the brighter orange pepo cultivars. Maximas also tend to have stems with a soft and corky texture, in place of the sturdy and convenient handles of other pumpkin varieties.

As the name Maxima implies, this is the group including pumpkins of enormous size, which win prizes at county fairs for size and weight. One-hundred pounders are common in this class, and the weight record for a Dill’s Atlantic Giant Maxima type pumpkin is a whopping 2,323.70 lbs.!

The Maxima group also includes many winter squashes, such as banana squash, Hubbard, turban squash, and some unusual pumpkin varieties like the Australian variety, the grey to blue-skinned Jarrahdale pumpkin.

People often use winter squash in decorative displays along with pumpkins. The Hubbard is dramatic for its shape, large size, and pleasing dark-green colors. Turbans come in interesting hat-like shapes and a wide range of alluring hues.

Fruits of the Mixta pumkin type commonly have a bulbous bottom and narrow top. Many varieties of miniature pumpkins are also in the Mixta group. In short, we can say that among the different types of pumpkins, Mixta includes the most unusual.

Mixtas span a color range, including:

Mixtas make incredible decorations, given how many unusual shapes and different colored pumpkins you can find. Many are also edible.

The Mixta group also includes the Cushaw Squash. Cushaw Squash doesn’t look much like a traditional pumpkin, although it is used for pies. In outward appearance, it resembles an overgrown, bottom-heavy zucchini with a tough skin.

Talking About Types of Pumpkins

Knowing some pumpkin vocabulary allows you to talk more knowledgeably with growers at farmers markets, produce managers at grocery stores, and business owners when you see a pumpkin display that catches your eye in a shop or restaurant.

Here are a few of the most essential pumpkin-related terms:

Now, let’s dive into 40 of the most outstanding types of pumpkins, grouped by color and size.

For many people, pumpkin means orange-colored. Orange pumpkins might be the most common type. Still, there’s a vast selection of different varieties to choose from, differing in the shade of color, size, ribbing patterns, stem length, stem color, cooking characteristics, and more.

Orange pumpkins are classics for carving, and many make good pies, cookies, and baked goods. Orange pumpkins even look good just sitting in the right spot, minding their own business.

Mid-sized orange pumpkins range from about 10 to 25 lbs. 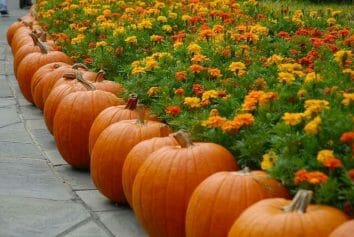 Large and jumbo orange pumpkins routinely grow as big as 25 lbs. Many grow much larger. 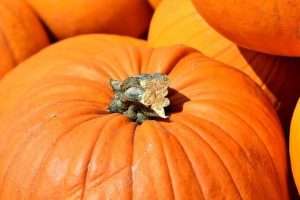 Some Favorite Varieties Include: 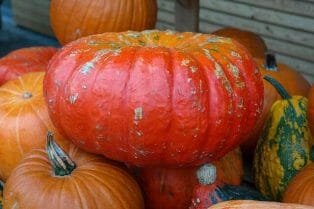 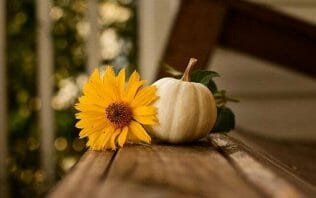 Tan pumpkins are mostly from the moschata cucurbit group. They often have ‘cheese-wheel’ shapes, and they are among the best pumpkins for pie-making. 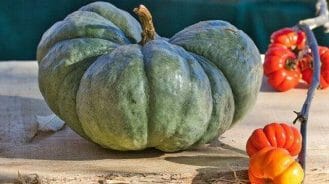 Most pumpkins start green when the fruits are young, and you can eat some varieties of pumpkin as a green vegetable when fruits are immature

One type of pumpkin that’s green when mature looks more like winter squash and is a Japanese cultivar in the maxima group. 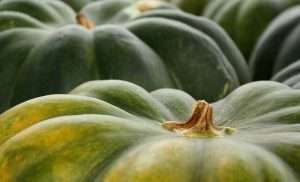 Blue-green is a color all to itself in the world of pumpkins. These colored fruits go well in displays with pumpkins of the dark orange category, and most are also excellent for eating.

White and Other Unusual Types of Pumpkins 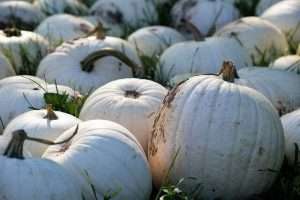 White pumpkins aren’t good keepers, so be ready to remove them from a display or use them up before they begin to fade in a week or two. Many white pumpkins have attractive orange flesh with good texture and eating qualities. 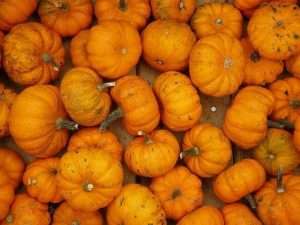 Miniature pumpkins come from different pumpkin groups, with many found in the Pepo and Mixta types. Mini pumpkins range in weight from about 1 to 3 lbs. and about 3 inches to 6 inches in diameter.

Because they are so small, carving mini pumpkins is difficult. Instead, most people use mini pumpkins by displaying them in baskets, bowels, or set out on a tabletop or other surface, sometimes with larger pumpkins in the mix.

The skin of many mini pumpkins is smooth, allowing for easily painted decorations.

Popular varieties of mini pumpkins include:

Other Unusual Types of Pumpkins

Unusual qualities in pumpkins include warty skin, unusual colors, and strange shapes. These odd-balls can add an extra artistic dimension to decorative displays, and many of them are also tasty when cooked.

Here are some popular unusual pumpkin varieties you can find at farmers’ markets, produce stands, and supermarkets. 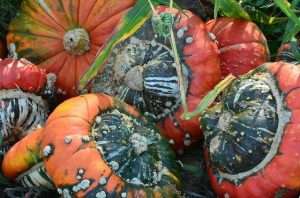 Close relatives of the pumpkin are pumpkin-like squash with the same uses as regular pumpkins. Turban squash is an excellent example of this group of cucurbits.

Turban squash has an interesting shape resembling a hat, with a flat, round circumference and what looks like a second fruit popping out of the top called a blossom end button.

Turbans squash are often multi-colored, mixing orange, cream, white, green, red, and yellow into the same fruit rind, and the colors can vary from the top to the bottom of individual fruit.

To be sure, these pumpkin-like squash are not so good for carving or pies, but they are excellent to eat in soups, stews, and as a steamed vegetable.

Here are some top varieties of turbans and other pumpkin-like squash:

Conclusion about Different Types of Pumpkins

Pumpkins are a lot of fun for Halloween, baking pies and cookies, making nutritious soups and stews, and enjoying as a fall decoration.

All different kinds of pumpkins are usually easy to find in most locations from September to November. Bringing home different colored pumpkins adds beauty, nutrition, and delicious food to any home. 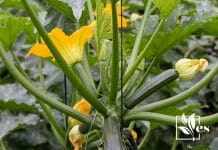 7 Vegetable Plants With Yellow Flowers To Grow in a Garden 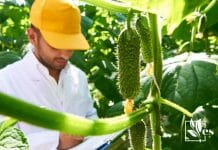 How to Grow Korean Cucumbers From Seeds 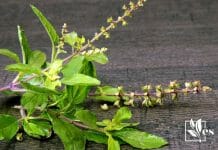 Thai Basil vs Holy Basil: Grow Your Own and Learn How to Tell Them Apart